Writing – How do you choose a setting?

On our sister site willblyton.com, we’re looking at choosing a setting – any opinions would be appreciated.

Will Blyton - The Alternative Detective

At the moment, I am writing a free in between story for our willblyton.com website.  It is called” Will Blyton and The Maggoty Motleys” and I’m being either brave or stupid as the work in progress is being posted.  The Will Blyton books are aimed at 9-12 year olds and explore time travel and will be introducing William Shakespeare and his plays in the books and free stories.

Filed under About Loony Literature

Inspiration and Us. Enid Blyton is to Blame!

Enid Blyton helped make me the person that I am today so much so that my son’s middle name is Blyton.  Before anyone suggests throttling this author, who is no longer with us, for all the pain of Loony Literature which is thrust upon you – let me explain what I mean.

I love detective stories, they comfort me when I am depressed, ill or simply exhausted – that makes me sound like a bundle of fun, I know  – but I think you get what I mean.  I would go so far as to say that detective stories are my adult comfort blanket.  I can see I am digging myself further in here – chocolate, ice-cream, a glass of wine or even loud music are the usual comforters – stories about murder? Never!  It is all down to Enid Blyton. 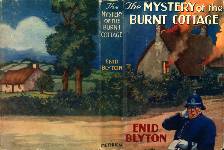 The first story in the series.

The first ever detective stories that I stumbled upon were Enid Blyton’s Five Findouter Mystery series.  I am surprised that although most people have heard of the Famous Five and The Secret Seven, a lot of folks have not come across The Five Findouters Mystery series.

There was one aspect of these books which made them different from all the other books I read as a child and that was the character of Fatty – Frederick Algernon Trotteville.   Fatty’s life intrigued me.  It was how I wanted my eight or nine year old life to be.  He had a shed which he used as a headquarters and in it, he had disguises galore.  Fatty would use his disguises to fool villains and solve crimes.  I was so taken with Fatty that I started rifling my mother’s clothes and anyone else’s I could get my hands on.  I distinctly remember dressing up as a Russian spy and talking in a Russian accent – well, it was my idea of what a Russian spy was like in the late 1960s.  The point is that I still have dressing up trunks, masks and long gloves – the enjoyment has never left me.  When I have parties, they are always costumed and sometimes people are given different persona’s.  The character of Fatty is still sitting on my back, watching and motivating me.

Fatty in disguise as an old gypsy woman.

About six years ago, I stumbled across Enid Blyton’s eldest daughter, Gillian Baverstock purely by chance at a literary festival.  Unfortunately, I missed her event, however, I told her how much her mother’s books had meant to me and the lovely lady talked at length about her childhood with her mother.  It was heavenly.  Sadly, she died shortly afterwards. 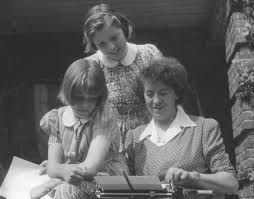 Enid with her daughters, Gillian and Imogen.

Of late, we have had a television drama about Enid Blyton which was not exactly a rosy portrait of her as a mother and we have heard her books being slammed for not being politically correct.  I would like to say that her daughter, Gillian spoke with lovely childhood memories of her.  Furthermore, we live in different times from when the books were written, I am not condoning anything which is not politically correct – I believe in absolute equality and respect for everyone.  However, I think that if we try to remove all trace of past deviancy with language, we remove the memory of how it should not be – that, I think is dangerous.

Enid Blyton is also guilty of inspiring me to write.  The Findouter Mystery series has stayed with me all these years.  I think that as I entered my teenage years I realised that in reality I was not going to be a freelance detective who solved crimes whilst in disguise.  Subsequently, it went on the back burner until a couple of years ago when I was inspired by my son to create Will Blyton – The Alternative Detective.  It’s not the perfect solution to my yearning to be Fatty but I can be him in my mind – sort of.

Will Blyton having a detecting moment.

Filed under Creative Writing, Inspiration and Us, Parenting