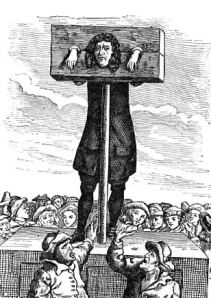 Author of Robinson Crusoe, Daniel Defoe was put in the pillory in 1703 for writing the pamphlet, ‘The Shortest Way With Dissenters’, which satirized the church.  However, it was not dead rats and bad fruit which were hurled at him but flowers.

The difference between the stocks and the pillory was that the stocks held the feet, so the punished person could duck to escape the barrage of bad eggs and faeces which were being thrown at them.  The pillory held the head and hands tightly so the person entrapped in it did not have the luxury of escaping the onslaught of undesirable objects thrown at him.

Certain crimes turned the crowd ugly.  Ann Marrow had a trick of impersonating a male, getting women to marry her and then defrauding them of their money and belongings.  On the 5th of July 1777, she was convicted of her crime at the Westminster Quarter Sessions.  She was sentenced to imprisonment for three months and was made to stand in the pillory once at Charing Cross.  So furious were the crowd, probably a large female one, that they obviously hurled hard rocks at her, as Ann Marrow lost the sight of both her eyes.

A baker, in the middle ages, who sold bread which weighed less than the required weight by law, could find himself in the pillory and facing the angry folks whom he tried to defraud.

Both pillory and stocks were exported to America with the Pilgrim Fathers.

Susannah Fleming was placed in the pillory for fortune telling at Newcastle’s Newgate Street in 1758.  It is a pity she could not tell her own fortune; she fainted and nearly choked.  Luckily she was saved by a passing sailor.

Filed under The Peculiar Past