Illustrated by John Leech in 1843.

How do you view the thrifty? Sensible or like one of Dickens’ most famous characters, Scrooge. Perhaps this will help you to make up your mind.

I first became interested in thrift when my late uncle sagely announced that he never let a grocer weigh the tomatoes until he insisted that the stalks be removed.  If that seems extreme, it soon becomes obvious that it is nothing to what has gone on in the past.

Thrift in the nineteenth century was a well-rehearsed skill from the highest seat of society down to the lowest.  One of the perks of being a ladies’ maid was getting the mistresses’ gowns whilst other unused pieces of cloth would be collected together in a ‘rag-bag’ and household servants would often be allowed to keep these.  They would be passed on to a street buyer, rag and bone man or rag and bottle shop.  Linen would be separated to be sold to a paper manufacturer as paper was made from linen and rag well into the nineteenth century. 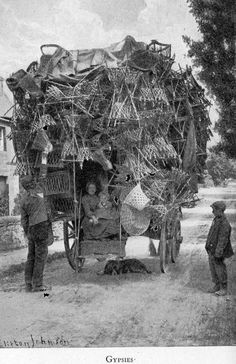 Bring out your rags.

Used tea leaves would be utilised to clean carpets and then passed onto cleaning ladies who sold them to dealers.  With a bit of artificial colour thrown in, the dealer would then put the tea leaves (which had been on the carpet) on sale as fresh tea.

Who claims the fat

Each servant appeared to have their own expectations of the booty they could claim and the fat from the roasted animals was earmarked by the cook.  The dripping, as the fat was called, would be used like butter by the poor.

Even bones were sold onto the rag and bone man for fertilizer and household ashes and dust were marketed to help make bricks.  It seems that nothing was thrown away, as soot from chimneys was vended for manure and insect killer.

As people were not aware of how germs were transmitted, it was a regular practise for the very poor to collect dog manure or ‘pure’ as it was politely called.  This was sold to tan yards for the processing of leather for the soft kid gloves so beloved by the rich.

Where there is muck there is brass.

Mrs Child, an American housewife, advised in 1828 that after old coats and pantaloons for boys had been cut up and were no longer capable of being converted into other garments, the housewife should slice them into strips and use the leisure moments of children or domestics in sewing and braiding them into door mats.

Waste is an act of treason

By 1915, thrift in the home was the order of the day.  “Waste is an act of treason when every penny saved helps to save your country.”  This reminder was on the bill announcing the opening of the Patriotic Thrift Exhibition at Hamilton Rooms, Park Street, Bristol 25 – 30th November 1915.  The exhibition was organised by the National Union of Women’s Suffrage Societies who offered a range of lectures on domestic subjects which represent war service in the home.

A familiar theme concerning thrift is that of the wealthy preaching to those less well off.  At the Exeter Society in 1923, the president, Lady Rosalind spoke on women’s extravagance.  She warned of the ‘melancholy spectacle’ of cheap pianos, cheap jewellery and cheap furs bought by women who could not afford them.

During World War II, women found it difficult to get hold of stockings.  Stockings were made of silk as nylon wasn’t invented until 1938 and initially only on sale in America from 1940.  As silk was used to make parachutes for the wartime effort, silk stockings became a rare commodity as both manufacturers and retailers charged high prices and asked for too many clothing coupons for them.

What you have to do.

In 1944, a bus conductress from Truro found herself in court after being thrifty over silk stockings.  On June 28th, she acquired two pairs from a bus driver without surrendering coupons.  Captain Craze for The Board of Trade snatched the stockings for disposal but they were later seized by the Customs and Excise Department.  Craze opposed this measure saying that he would have to take further instructions from The Board of Trade.  The case was adjourned for a fortnight; thrift can end up causing a lot of expense.

It seems that thrift is here to stay.

Filed under History, The Peculiar Past