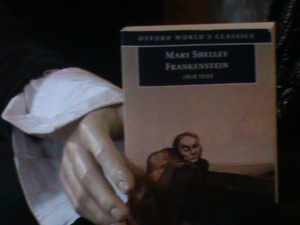 Loony Literature is about being creative with literature.   It is about creative reading as well as creative writing.  As both a lover and graduate of this subject, I positively enjoy deconstructing texts from different points of view – that is what studying literature is about.  It is not about knowing every quotation from Shakespeare as non literary people often assume.  It is about taking a text and analysing and evaluating it whilst backing it all up with textual evidence.  We can add to our arguments by reading the text from a certain perspective e.g. a feminist or a Marxist point of view.  If we enjoy psychoanalytical theory we can use Lacan or even go down a Freudian route.  The possibilities are endless and as long as we can back our argument up with textual evidence, we are free to do this.  There is no right or wrong answer in literature – it is creativity heaven.

Much has been written about Mary Shelley’s Frankenstein; in fact, far too much to mention in this introduction.  I have been using the text as a springboard to write a play and workshops.  However, as all great pieces of fiction tend to do, it has demanded that I read it yet again from a totally different angle.

I love the fact that Frankenstein was written by a teenager.  The other detail about Mary Shelley which sits heavily in my consciousness is that her mother died through complications following her birth.  I am both daughter and mother.  The two relationships are entwined in my being like thread in tapestry.  I feel so much sympathy for Mary Shelley as a young girl growing up with only other people’s stories of her mother.

These two facts have made me read Frankenstein again.  I am going to read it as a subconscious cathartic writing exercise for Mary Shelley.  In other words, Shelley wrote herself as Frankenstein.  The monster is her dead mother, Mary Wollstonecraft.  As a teenager, Mary would read on her mother’s grave in St Pancras Churchyard.  The mother was beloved but unobtainable.  It is bad enough as a teenager when your parents do not seem to understand your emotional turmoil.  Mary did not simply have intentionally deaf ears to contend with but dead ears.  Mary needed to find a way to communicate her isolation. I believe that Frankenstein can be read as a letter from Mary Shelley to Mary Wollstonecraft.  How else can an abandoned daughter let her dead mother know what she went through whilst growing up without her?  Fundamentally, as the dead mother was a literary forerunner of her day, there was only one way to get such a mother’s attention and that was to create her own literary masterpiece.  Ironically, Mary Shelley conjured up her own dead mother in the position of abandoned child. 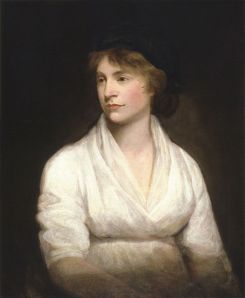 If the monster is supposed to portray her dead mother, why did she make him male?  We all know that women used to constantly die of childbirth in those days; by re-inventing her mother as male, she prevents this taking place.  She needs to keep her mother alive as she lives out the story of isolation Mary felt as a motherless child.

I am at the beginning of this reading of Frankenstein and hope that you will join me on the journey.  I will be making regular posts as I travel on my own new reading journey of Frankenstein.  My model for Frankenstein might not work out.  Ultimately, by offering a hypothesis and then writing a notebook on my reading, I hope that readers of the posts will come up with their own valuable insights.  If this works, I will tackle other delicious texts in the same way.  So let’s talk about Frankenstein.